Share a memory
Obituary & Services
Tribute Wall
Read more about the life story of Mary Lou and share your memory.

A Celebration Of Life Service will be 11:00 A.M. Monday, January 16, 2023, at the Moorhead Christian Church, Moorhead, Iowa, with Pastor Chuck Snow and Pastor Michael Brady, PHD, officiating. A recording of the service will be posted on the Goslar Funeral Home website with Mary Lou’s obituary. A private family burial will be held at a later date in the Spring Valley Cemetery, Moorhead, Iowa. A visitation will be 5:00 - 8:00 P.M. Sunday, January 15, 2023, at the Goslar Funeral Home Chapel, Onawa, Iowa, with a prayer service at 7:00 P.M. Arrangements are under the direction of Goslar Funeral Home and Monuments, Onawa, Iowa.

Mary Lou was born October 22, 1928, in Rural Moorhead, Iowa, the daughter of Loys and Beth (Perkins) Neal. She graduated from Moorhead High School with the class of 1946.

Mary Lou and Charles L. Kratz were united in marriage on October 26, 1946, at the Moorhead Christian Church, Moorhead, Iowa.

She enjoyed being with children and was a Head Start Teacher and piano teacher for many years.

Mary Lou was a member of the Moorhead Christian Church. She was very active in church as she was an organist for over 50 years, a Sunday School Teacher, Deaconess, and CWF Chairman. She loved crocheting and knitting and had a passion for gardening and enjoyed her many plants and flowers. Mary Lou loved having her family around and was actively involved in all of their activities.

Memorials in Mary Lou’s memory may be made to St. Jude Children’s Hospital or American Heart Association. 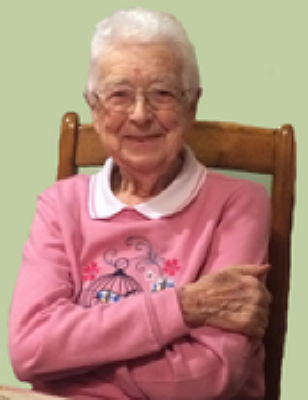